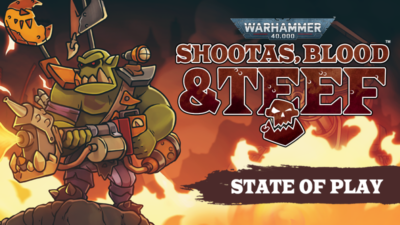 Whatz da score? We are nearing the final days of 2021, and what a year it has been for us! With the year ending we’d like to give you an update on everything Warhammer 40,000: Shootas, Blood & Teef related we’ve shown so far, taking you back to our first announcement trailer on Skulls 2021 and going over the monthly developer updates. We’ll also be touching on the things you can expect from us in 2022, so if you want to know more about that, make sure to read until the end!

Okay, so let’s go back to the beginning of June, and Skulls 2021, the biggest online Warhammer event there is. An hour and a half of Warhammer goodness, and our trailer was in there! We still can’t believe it! Before this event the game had been a secret held close to our hearts, and we were super excited to finally share our newest project with the world. A lot of questions popped to mind, especially the curiosity of how the community would react to the newest addition in our portfolio and the Warhammer universe.

Then our moment was there. The Warhammer 40,000: Shootas, Blood & Teef trailer came on! Our hearts stopped for a whole minute and six seconds, reading every comment passing by in the comment section on Twitch. It was flooded with positive comments! The weight on our shoulders lifted, and was replaced with relief and excitement!

If you haven’t seen the trailer yet, or you just want to watch it again for the hundredth time, here you go:

This was the starting point of it all. The weeks following we started sharing more information through monthly developer updates and the rumour engine, showing snippets of the game.

Over the course of the past months we’ve shared more information on the factions/alliances that have made it into Warhammer 40,000: Shootas, Blood & Teef. These factions are the Astra Militarum, the Genestealer Cult, the Orks and the Space Marines.

For those who’ve missed the previous developer updates, here’s a quick summary of what has been spoiled. Links to the previous articles are added for those who want to get the complete picture.

The Astra Militarum was the first faction we’ve shown back in August. They are the largest fighting force in the Warhammer 40,000 universe and will be prominently present throughout the game. What is an Ork game without some humans to smash, right? You’ll get your fair share of smashing their heads in and pumping them full with lead.

More information and background lore can be found in August’s post where we’ve discussed every Astra Militarum unit.

In September we continued with the Genestealer Cult, a group of terrifying mutants who worship the Xenos and work to undermine the planet’s defenses so their alien Gods can devour it. The Genestealers do have some tanky and robust fellas in their ranks. For instance the Aberrant who just would love to smash in your face with his two-handed power hammer. Another unit is the ever so lethal Metamorph who will charge onto with shank and dynamite in hand.

More information and background lore can be found in September’s post where we’ve discussed every Genestealer Cult unit.

Then we continued with a fan favourite in October, or should we say Orktober! The mighty, the savage, the fierce Orks! Truth be told they are probably our favourite faction otherwise we wouldn’t have made Ork characters our protagonists. Spread across the whole galaxy, yes they are with that many, looking for humies to krump. In the developer update we specifically talked about the AI Orks in Warhammer 40,000: Shootas, Blood & Teef, we are planning to unveil the player characters at a later moment (early next year)! For those wanting to see some sneak peeks, make sure to keep an eye on our socials the coming weeks.

More information and background lore can be found in October’s post where we’ve discussed every Ork unit in the game, even the cute Squigs!

In the latest developer update, the one in November, we talked about the Space Marines. They are probably the most well-known faction in the Warhammer franchise for people who don’t know all too much about the universe. We simply couldn’t exclude them and had to put at least a few Space Marine units in Warhammer 40,000: Shootas, Blood & Teef.

More information and background lore can be found in November’s update where we’ve discussed the different Space Marine units.

The Rumork Engine is a weekly occurrence we’ve been doing on our social media for the past few months. With the Rumork Engine we share a small visual snippet from a new unit we have been working on with the community. This was a fun little thing for us to lean into the Warhammer community, as they have been doing this for ages with their miniatures, and try to make it our own.

A lot has been revealed so far, and more exciting things are to come.

If you haven’t seen the Rumork Engine before, below are a few examples listed. 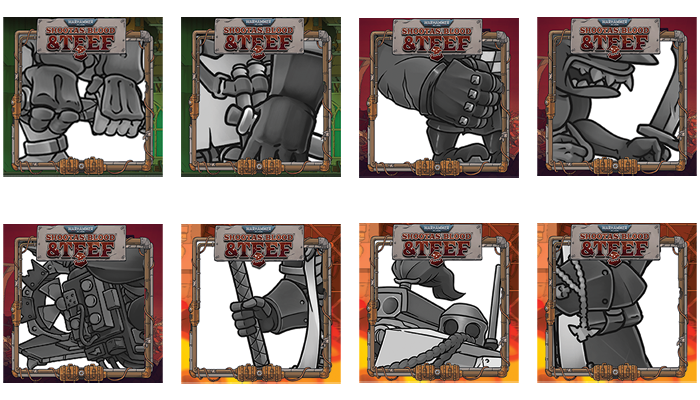 You can check all the other Rumork Engine posts for yourself by clicking through on the following links:

So what’s happening next?

First of all we’ll keep doing the monthly developer updates at the end of each month. The things we are aching to show you are the playable Ork characters (their skins look amazing!), a deep dive into the gameplay, some of the bosses you’ll encounter and the awesome music we are preparing! So stay tuned for those.

Secondly the game is evolving to a stable, playable state, which means that we are almost ready to do a public demo! Be sure to look out for moments whenever the demo is available, it’ll arrive sooner than you may expect. We cannot wait for you to try the game and give feedback on how to make Warhammer 40,000: Shootas, Blood & Teef the perfect game for you.

Lastly the release of Warhammer 40,000: Shootas, Blood & Teef. While no exact date can be given at this stage, the game will 100% be released in 2022. Those who want to play the game on consoles will have to wait a little longer, as the game will be released on PC first, but the console version is still planned for 2022.

So this is the end of the State of Play covering all of the exciting information we’ve shared during 2021. Thank you everyone for all the love and support, we greatly appreciate the passion you have for Warhammer 40,000: Shootas, Blood & Teef. You, the community, are the people who thrive us to deliver the best gameplay experience we can, and together we will achieve that!

If you are left with any questions or would like to know more about anything that comes to mind, don’t hesitate to get in touch. You can do so on the Steam discussions page or directly through our Discord server.

Again thank you for staying with us. We wish you happy holidays and a wonderful start of 2022! We’ll see each other again in the new year, take care!