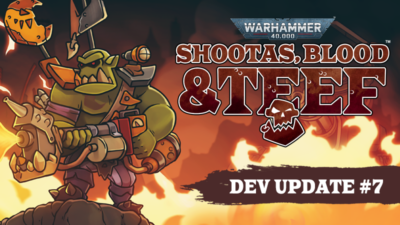 Today we have an extra exciting update to share with you! I’m sure you all have been waiting for this one. Today we’ll be delving deeper into the playable characters and their design! They have been the topic of our rumork engine for a while now, in this update we’ll be telling you everything there is to know. We’re so stoked on how the designs have come together as well as the stunning visuals.

Warhammer 40,000: Shootas, Blood & Teef will include four distinct playable classes, each with their own passive ability, melee weapon and throwables. Players can freely switch between classes while in the lobby. The characters are designed true to their lore, and with the idea of a certain playstyle in the back of our minds. The four playstyles we focused around are close combat rumbles, midrange scrap fights, guns blazing from ranged and a more crowd control-like style of play. These different ways of approaching the game will give you the opportunity to create a tailored experience.

Let’s take a look, shall we!

These gits live for the hunt. Seeking thrill in hunting the largest creatures and machines, ranging from tanks and monsters to even Titans. The Beast Snagga lives a nomadic life, embracing traditionalism and having a disregard for complex technology. Rather than technology, they will rely on using Squigs in battle.

In Warhammer 40,000: Shootas, Blood & Teef these nomadic Orks have lots of midrange potential. They can be somewhat seen as a hybrid between offensive strength and crowd-control options. Hulking with muscles they sure know how to pack a punch, be it from a larger range than normal melee weapons.

Rokkit Spear: (Ability)
The Rokkit spear is the Beast Snagga’s throwing weapon that replaces his melee weapon. With it he can spear enemies to walls and knock back anything the spear pierces. After a fixed amount of time the spear will explode, dealing additional damage to surrounding enemies in a small area.

Bomb Squig (Throwable)
An adorable but deadly bomb. Instead of throwing a standard grenade, the Beast Snagga will throw a bomb-strapped squig. When this squig lands, he will start chasing and attacking the nearest enemy. The squig continues chomping on the enemy until it dies or its time has run out, exploding in both cases.

The Psykers of the Ork race, acting as focal points for the energy subconsciously generated by their greenskin comrades. Raw and uncontrolled Waaagh! energy flows through their heads, amplified by their natural affinity.

In Warhammer 40,000: Shootas, Blood & Teef these energy-crazy gits have lots of crowd-control potential and excel at locking down enemies with all kinds of shocking contraptions. The toolkit is crafted around manipulating and incapacitating enemies, creating advantageous situations for you and your team!

Weirdboy Staff (Passive Ability)
Mightiest of mighty bonk weapons. While other classes have a common melee attack, the Weirdboy has a stunning staff. This staff does less damage than any other melee attacks, but sure makes up for it with a handy feature. Anyone who gets bonked with the electrified staff will be stunned by the electrical discharge. Effectively neutralizing the target for a brief moment. It’s a fun crowd-control feature, which might come in clutch in the heat of battle. Especially during co-op play with your friends!

Shokka Bomb (Throwable)
As the design of the Weirdboy is built on shocking and stunning enemies, you’ll probably already have a hunch of what the Shokka Bomb is able to do. And you are right! The Shokka Bomb is a throwable sort of stun grenade, emiting a pulse of electricity that shocks anyone who’s in the vicinity of impact for a short duration. This bomb is the perfect tool to control a larger pack of enemies, locking them down unable to move a muscle.

The most obnoxious, gun-crazy Ork of the bunch. These gits love their guns more than anything in the galaxy! The Flash Git takes any opportunity it gets to fight alongside the rest of the Boyz. Live by the Dakka, die by the Dakka!

In Warhammer 40,000: Shootas, Blood & Teef these gun-crazy Orks will be the go-to class for those who love raining down destruction from a distance. Their unique passive More Dakka will help them tremendously during battle. Even though the Flash Git has a fast attacking melee weapon (Choppa), he thrives while using guns! And they’ll always be asking for more Dakka!

More Dakka (Passive Ability)
Usually when a gun is fired the ammo is consumed, right? Well, not with More Dakka, or let’s say not always. The More Dakka passive ability gives the Flash Git a chance to occasionally not consume ammo. This allows the Flash Git to fire weapons longer before reloading, and possibly (praise to Gork & Mork) prevent a reload for the Rokkit Launcha, which takes ages.

Burna Bomb (Throwable)
A bottle filled with a flammable liquid and topped with a rag. These grenades explode on impact on the surface, or enemies, engulfing the surroundings in a sea of fire. This allows the player to create some sort of fiery barrier between himself and his opponent. It’s also just pretty neat to set your rivals on fire. Be careful though, although setting fire to the ‘umies is cool and fun, you can seriously burn yourselves as well!

The shock troops of many successful warbands. They share the Orkish desire to dive into battle as quickly as possible. And for this they are going far, strapped to rokkit packs effectively propelling their wearers forward straight into battle!

In Warhammer 40,000: Shootas, Blood & Teef these fellas are all about close combat, dashing in fights and smacking ‘umies in the face with their Tankhammer. It’s a slower attacking weapon, but has increased force comparatively to the other classes. They are not bound to only using melee weapons, as all guns will be available for any class. Of course they will also be able to use guns.

Rokkit Dash (Passive Ability)
The Rokkit dash improves the dash ability of the Stormboy by adding fire damage to it. Instead of doing a small amount of damage and knockback like the normal dash with, this improved dash deals greatly increased fire damage while also knocking back opponents. This allows the Stormboy to dive straight into battle, getting a fiery advantage as he propels himself forward.

Klusta Bomb (Throwable)
The Klusta bomb is an explosive grenade ejecting into smaller submunitions, resulting in smaller explosions, but a larger radius of explosions happening. This allows the Stormboy to function as a carpet bombing character, holding control of a larger area on the battlefield. It’s capable of quickly wiping out large crowds by dealing a large amount of damage in a short time.

Orkz may be scrawny, brutal and vicious, but they still want to crusade through the galaxy in style, right?!

First of all there are four clans your character can belong to.

We’ve decided on adding the Bad Moons, Goff, Evil Sonz and Deathskulls. Each has their distinct color, and overall a different skin attached to them. Do note even though in the lore each color has its own upgrade, for example red is faster, in this case the skins are purely cosmetic and give no extra advantages. So you are free to choose whichever skin you like to most, without having to choose for extra power.

Next to the choice of clan, there is also the opportunity to up your character’s swagger with some cool hats! Some of these hats will unlock gradually while completing the game, for example whenever you kill a certain boss. Other hats are acquired through completion of certain achievements. This could be killing characters a certain number of times, having a certain number of victories in a PvP lobby, and so on. Then there’s also a range of hats which are purchasable with Teef at the in-game Mekboy shop. Teef is an in-game currency, earned by playing the game.
That’s all on the playable characters and customization options! We hope you are excited as we are. Talk to you soon!