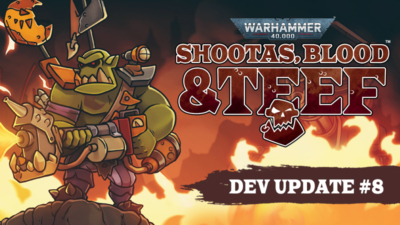 What’s the score? First of all, a big thank you from our team to everyone who played the demo over the past weeks. We hope you all had a blast! We’ve also received a lot of valuable feedback to continue working with, and improving the game. We’ve also seen a lot of comments pass by asking about the gunplay variety in Warhammer 40,000: Shootas, Blood & Teef. So let’s talk about what Orks love most: DAKKA!

And to increase variety each weapon also has three extra modifications, creating whole new weapons. These modified variants are unlocked throughout playing the game and trading in your hard earned ‘teef’ at the Mekboy Workshop.

This makes for a grand total of twenty weapons. Let’s take a look!

Slugga: The old reliable pistol, the slugga is the main weapon of any worthy Ork Boy who likes it when the heads of their enemies go boom. It’s a lethal weapon with low fire rate, making it the perfect weapon for some precise kills.

Looted Plasma Pistol: Stolen from a lost space marine, this powerful pistol fires exploding bolts of plasma. But watch out because it can overheat and deal damage to you! You got to be tactical with this one and figure the best times to cool down before the heat is on!

Six-Shoota: Any yoof has proven their worth wielding one of these. It fires exceptionally powerful piercing shots but needs to be reloading round per round.

Shokka Pistol: The mekboys most recent creation! Holding the trigger on the shokka pistol charges up, releasing the trigger fires a lightning bolt, dealing shock damage in a straight line. Longer charge times lead to bigger range and more damage!

Shoota: Any Boy’s favorite dakka. This assault rifle deals reliable amounts of damage but isn’t very accurate. Average against all types of enemies, which never makes it a bad choice!

Snazzgun: There is no Shoota that can pump out this many shots over such a short period of time. The Snazzgun builds up firing speed as long as the trigger is held! Making it a great option for tight corridors packed with enemies, easily mowing them down.

Splinta Shoota: What is better than dakka, you may ask? Dakka that bursts into more dakka on impact! The Splinta Shoota’s bullets fracture into smaller fragments after impact, piercing most enemies.

Bolta: Lessons learned from fighting space marines! What if your dakka explodes on impact! With increased barrel width, the Bolta is able to fire Bolta rounds. These are large pieces of ammunition resulting in a devastating explosion on impact. Each shot fired will also have a minor kickback.

Boomstikk: This Orky shotgun is a powerful close range weapon. Dealing a large amount of damage and knocking enemies back. Just aim at the side the enemies are on and you are probably guaranteed a hit! Gun crazy Orks looking for a kick will enjoy this one.

Double Barrel Boomstikk: Doubling up the barrels for the Boomstikk gives you this quad barreled monstrosity! Its firepower is immense but the clip size is small. While it has only two shots, it will quickly dispose of any opponent.

Burnastikk: This modified version of the Boomstikk fires short bursts of powerful flames. Able to light anything on fire in an instant with one single burst.

Zzapstikk: Looting some lasgun tech from the Imperial guard, the mekboys have built a Boomstikk that fires laser beams that bounce off the walls. Pull the trigger and see beams scattering everywhere, it’s insanity!

Rokkit Launcha: An orky rocket launcher. Perfect for disintegrating any foe. It’s the highest damage weapon available, but comes with a trade-off. Reloading the device is a tedious and pretty long process, but the damage more than makes up for it. And well… who doesn’t like explosions!

Gitseeka Missiles: A solution for the Ork’s amazing aim are the Gitseeka Missiles. These squig-powered missiles home in on their target, tracking them tirelessly. Just shoot in any direction and you are guaranteed a hit!

Squig Mine Chukka: This squig is specifically bred for the purpose of stuffing it with explosives until it can’t move. When someone steps on it, it explodes violently. Chug out mines and enjoy the chaos!

Stikky Bomb Launcha: What happens when you add a timer and glue to a rokkit? Stikky rokkits of course. Plug your enemy full of tiny bombs, let him say his last player before the timer runs out, resulting in a sea of explosions. The individual rockets themselves have a smaller blast radius though.

Skorcha: This powerful flamethrower is capable of setting your enemies on fire. Causing them to panic and run! No reload time here, but play with fire (a lot) and you will get burned.

Killsaw: Who needs guns when you can just take a saw to their chest! The Killsaw is capable of dealing massive amounts of damage but it needs to be done at an exceptionally close range.

Shokka Cannon: Aiming is for gits, just hold the trigger and watch lightning jump to and between enemies. Dealing shock damage and stunning them for a brief moment! Perfect crowd control tool, and especially fun to use co-op mode!

Deffbeam: The Deffbeam focuses the power of a laser into a single consistent beam! The longer it is focused, the more damage it deals. It can be hard to control though and slows down aiming while firing.

That’s all of the available guns in Warhammer 40,000: Shootas, Blood & Teef. A grand total of twenty weapons are waiting for you on Luteus Alpha. We do want to underline that every class can use any of these guns. None of the weapons discussed above are bound to a specific class. Just play what you like, as we are sure there’s plenty of dakka for everyone!

Take care, and talk to you soon!