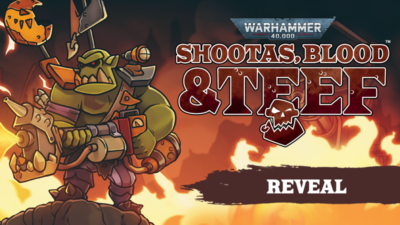 From the developers of the critically acclaimed Guns, Gore & Cannoli franchise comes a new adventure set in the Warhammer 40,000 universe!

We are excited to reveal our brand new 2D action-packed platformer, Warhammer 40,000: Shootas, Blood & Teef, coming to PC, PlayStation 4, PlayStation 5, Xbox One, Xbox Series X and Switch next year. Run and gun your way through the hive, smash anyone standing in your way (even other Orks!) and get your revenge.

Play as a savage warrior of the Green Tide, and become the spearhead of an Ork invasion as you bash, smash and shoot your way through the hive city of Luteus Prime on a mission to retrieve your hair squig and claim vengeance on your warlord!

And just maybe become the warboss of a WAAAGH! along the way? Survival of the strongest has never been so violently fun! Scour the battlegrounds, defeat powerful bosses and collect teef to upgrade your arsenal and increase firepower!