Warhammer 40,000: Shootas, Blood & Teef is just around the corner! Figuratively speaking that is. In about two weeks you’ll be able to set foot on Luteus Alpha, and start your explosive adventure to retrieve that luxuriant hair squig of yours! We can’t wait for you to finally start playing! The countdown until the Warboss’ bomba takes off has started.

The demo will stay up between now and launch, so if you haven’t tried it yet, or you just want to bridge the gap until release, you’ll still be able to check it out.

Luteus Alpha. It’s one of the most important planets in the Armageddon sector. Mostly because of its large supply of promethium, needed to support the war raging on in the sector. Ogruk Gutrekka, Warboss of Waaagh! Gutrekka, noticed this, and decided he wants the world’s supplies of promethium all for himself.

And that’s where you, Gargaz, pop into the story. Set out to take over Luteus Alpha, together with your Warboss, before Ogruk decides to nick your luxuriant hair squig and kicks you out of his bomba!

While crashing downwards to the surface of Luteus Alpha, Gargaz swears he will take revenge on Ogruk for taking his precious. Determined to return this finest of accessories (and pet), the indignant Gargaz must fight his way through all manner of foes to challenge Warboss Ogruk himself. 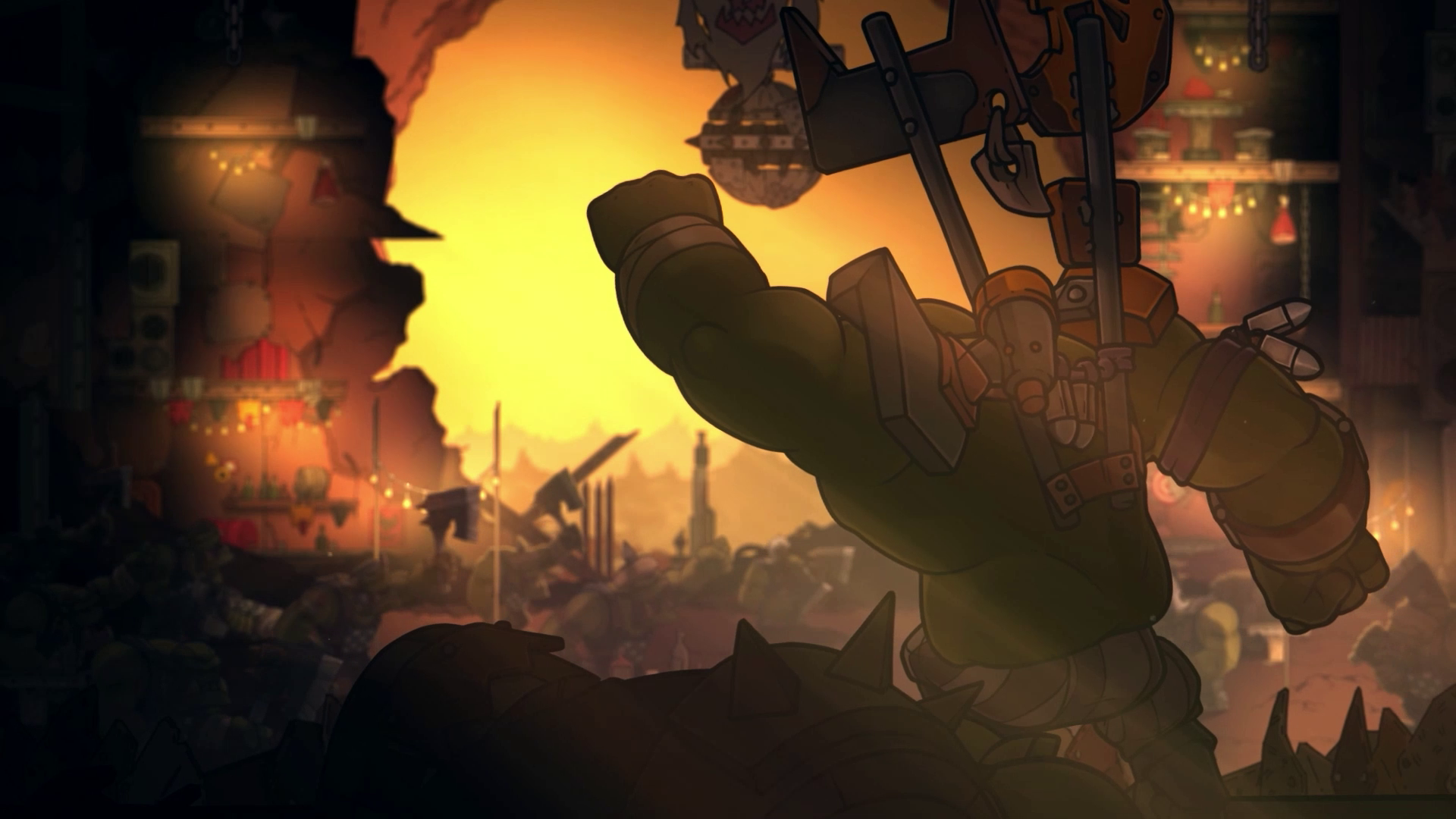 You’ll play as Gargaz Teefgrabba, a simple ork, who was leading a rather simple life before boarding the Warboss’ bomba. Krumpin’ humies every occasion he gets is what he does best, and that’s exactly what you’ll be doing throughout Warhammer 40,000: Shootas, Blood & Teef. Krumpin’ humies, and other not so human creatures.

Tackle the dangers in Luteus Prime as a lone wolf in singleplayer, or round up the warband and beat ’em up with up to four players. Multiplayer can be accessed in local play or through online play.

The Greenskins love their dakka more than anything in the universe, and there’s plenty to find on Luteus Alpha. Fill your dakka needs with a total of twenty weapons, split across five categories: Sluggas, Shootas, Boomstikks, Rokkit Launchas and Burnas.

Learn more about the weapons in this previous dev update.

Unlocking these new weapons is really straightforward. You can unlock them by spending the in-game currency called Teef at the Mek Shop. Teef are earned consistently throughout the game; by killing (mini)bosses and collecting so-called teefcaches. Access the Mek Shop in either the main menu or at any checkpoint you reach and go on a spending spree. 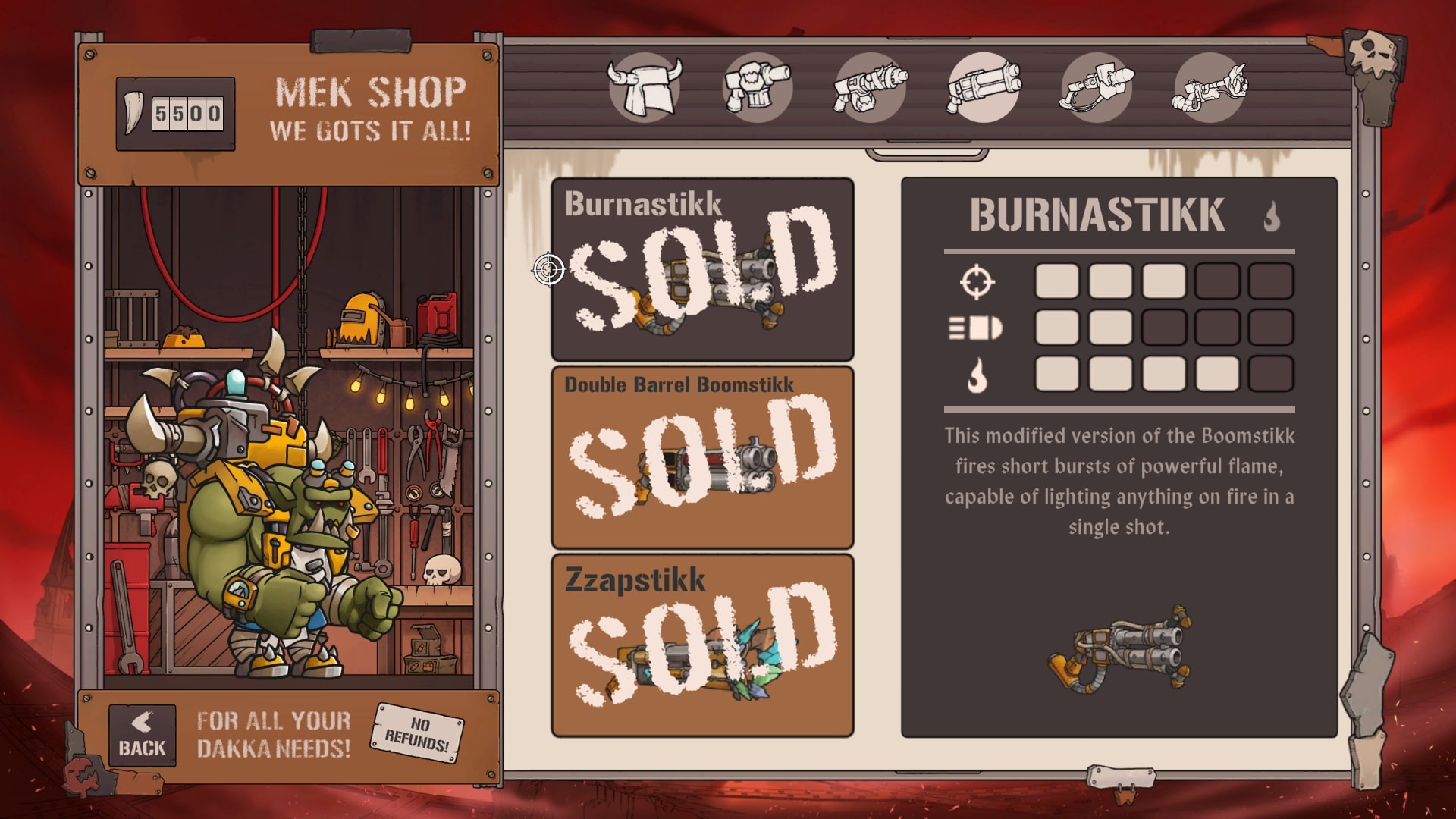 The Mek Shop gots it all! The finest looted shooties, and hats, to spend your Teef on! But spend wisely, as (mini)bosses and teefcaches only drop a limited amount of currency.

Next to the weapons, there are four distinct playable classes, each with their own passive ability, melee weapon and throwable. Players can freely switch between the classes while in a lobby. The classes are designed true to their lore, and give you the option to switch up the gameplay to cater to your playstyle.

Learn more about the classes in this dev update.

As mentioned, you’ll be encountering a lot of different enemies; Astra Militarum, Genestealers, Space Marines, and even other orks will try to smash your face! There are also multiple stronger, tougher foes, the so-called bosses, who will try to stop you in your tracks! Those who have seen the trailers and previous communication may already have an idea who some of these bosses are, so if you haven’t watched the trailer yet, be sure you do! We wouldn’t want to spoil too much, you’ll have to find out and encounter the rest of the bosses in your playthrough!

Next to the story mode gameplay, there is the Player versus Player mode (both local play and online play), or should we call it… Ork vs Ork! Scrap it out with your buddies, and show them who’s boss in all-out brawls. These fights are with up to four players and can be either every ork for himself or based on teams.

When creating a PvP match you’ll be able to select one of three game modes: Deathmatch, King of the Hill and Juggernaut. You’ll also be able to select the number of lives each player has, at which killcount the game will end and the time limit. When prefered, there’s also the option to exclude certain weapons (looking at you, squig chugga) or even whole categories from being used. And to add a little extra spice you can choose whether or not you want health/waaagh squigs to be present in the arena, and even low gravity zones! 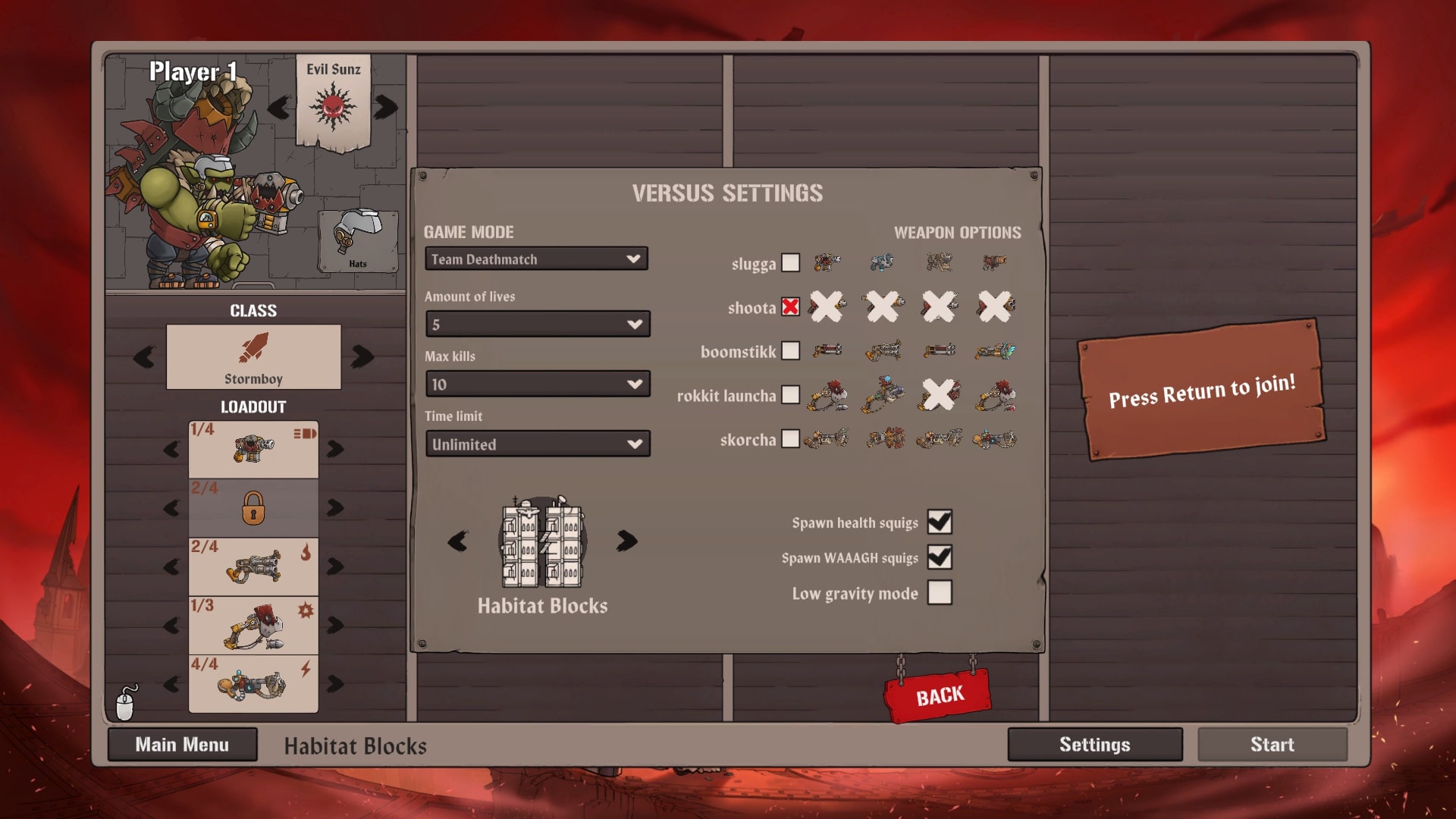 In total there are seven versus maps, each made with the essence of certain locations in the story. Good luck in brawling it out with your friends, and claiming the truthful title of Warboss!

Warhammer 40,000: Shootas, Blood & Teef is also having a physical release for Nintendo Switch and PlayStation 4 & 5, through partnership with ININ Games who will support the release. 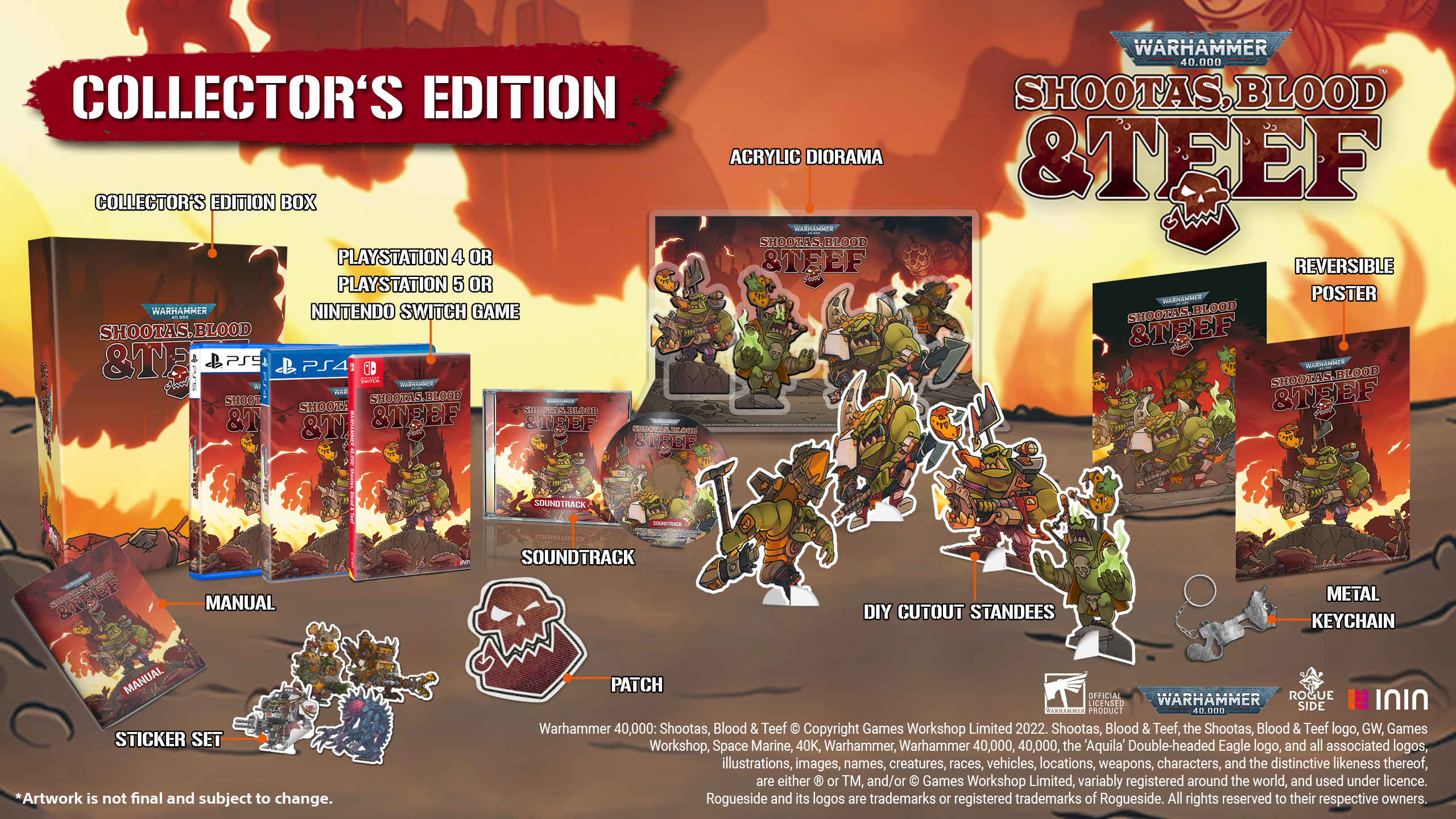 If you are looking to get your own physical copy, and literally get a hold of the game, there are still copies available for pre-order. Check them out here.

Back when we first released our demo during Steam NextFest in February we got a lot of response to the music being played during the final battle, played by our very own Six Shootas. Later on we released a clean version of the theme song, and it has been listened to a lot since then. During the Save and Sound festival we released a special look behind the scenes on how the soundtrack came together.

And today we’d like to announce that the full OST will come to multiple digital streaming platforms, pre-saving already available through following link: https://lnk.to/Warhammer40000-SBT

That’s all for this overview! We are very excited for the release, and can’t wait for everyone to try out the game. To conclude this overview, a word of thanks from the whole Rogueside team to the fans, and the Warhammer community, who’ve embraced our latest addition to the IP. The support we’ve received throughout development, and the validation that people would love to see more shoota action, fueled us to give it our all and create the best version of Warhammer 40,000: Shootas, Blood & Teef we can.

Thank you, and see you soon (for real now) on Luteus Alpha!