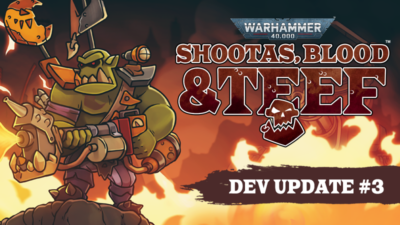 Welcome to the third developer update of Warhammer 40,000: Shootas, Blood & Teef. In this update we’ll be taking a look at one of the hostile factions you’ll encounter in the game: the Astra Militarum. Let’s get started, because we have a lot to show you!

A lot of you Warhammer 40,000 fans probably already know the Astra Militarum, but for those who don’t, we’ve got you covered! Without going into too much detail, the Astra Militarum is the largest fighting force in the galaxy, comprised of countless billions of men and women, all serving the Imperium of Man. All of these people are abiding by the will of the God-Emperor of Mankind, who has been sitting incapacitated on the Golden Throne for millennia.

Now as they are the largest fighting force in the galaxy, it’s pretty much a no-brainer to have them involved in Warhammer 40,000: Shootas, Blood & Teef. We’ll be giving you a rundown on the different Astra Militarum troops you’ll be facing throughout the game.

The Guardsmen basically entail any member of the Astra Militarum. Their purpose is to serve the God-Emperor of Mankind and protect Mankind against all threats, like those fungi Orks Waaghing through the galaxy. Not all Guardsmen have the same function, they fulfill every role imaginable from tank crewmen to medics.

These guys are a small unit of the Astra Militarum, but come bearing big toys. While this unit is stationary, those big toys comprise a lot of firepower. Their role is pretty straightforward: to obliterate Heretics and Xenos. They also come in different variations, not all big toys are identical. Some squads use Mortars to rain down explosive destruction on their enemies, others are armed with heavy bolters to destroy light vehicles or lascannons to shut down heavy vehicles.

O boy, are commissars feared, but also admired, by their own regiment. These guys are burdened with the duty to maintain troop discipline and morale, pretty much at any cost. And you can take that quite literally! Think of them as Chief Happiness Officers, but cold-blooded and ruthless. They have the absolute authority to punish and execute any member of a regiment who fails in their duties. Liquidating a command officer if necessary is nothing out of the ordinary. The Commissar is easy to differentiate from other units as he’s wearing a distinctive greatcoat and a stunning looking hat.

Ogryns are big, beefy blokes who are not shy of using their powerful physique to their advantage. They are abhuman, deformed from the baseline human state, and make for great shock troops. Ogryns may not be the smartest out there, but they do know how to pack a punch, are fearless in battle and strictly loyal to their commander. Just look at this guy, how are you ever gonna stop him?!

The Sentinel is a lightweight, bipedal combat walker, manned by only one man. The cool thing is, this fine piece of robotics can traverse any terrain. This fact alone is probably the main reason why it’s the favourite means of transport for Imperial Guard patrols. This Sentinel comes armed with a lascannon, capable of penetrating most armoured vehicles. So you better watch out when you encounter one!

Lastly, let’s talk about the Leman Russ. Those of you who’ve seen the trailer have probably already seen it. Those who haven’t watched the trailer (yet), shame! But here’s your chance for redemption! The Leman Russ is the main battle tank of the Astra Militarum, so there is no way we were not going to put it in the game. It’s named after the Space Wolves Primarch, Leman Russ! The tank is a slow vehicle, but the lack of speed is made up for in brute force and survivability.

Who would’ve thought that the Astra Militarum could look this charming?

Join us on the Official Discord to chat with the devs, share your thoughts with other members in the community and flex your Warhammer knowledge! Sign up for our newsletter and don’t miss a thing Warhammer 40,000: Shootas, Blood & Teef!