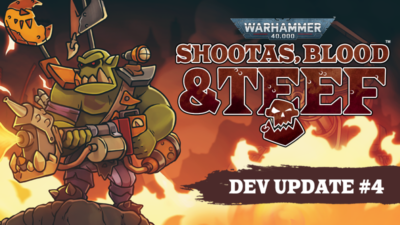 Welcome to another dev update for Warhammer 40,000: Shootas, Blood & Teef. Today we’ll be talking more in-depth about another faction you’ll encounter throughout the game: the Genestealer Cult.

Let’s kick it off with a small general introduction to the Genestealer Cult. Like any good cult, the Genestealer Cult is a secret xenos-worshipping society, hiding in the dark corners of the Imperial Underworld across the galaxy. The cults’ purpose is to take control of Imperial worlds in the name of their Xenos god. The moment they’ve conquered a world, the Hive Mind (an entity composed of pure psychic energy) will pick up on the news and consume the world, killing everyone. Sounds fun, right?

Now let’s take a look at the different units of the Genestealer Cult we’ve put into Warhammer 40,000: Shootas, Blood & Teef.

Starting off with the Genestealer. The Genestealer is a lifeform of the Tyranid race, genetically designed by the Hive Mind to infiltrate the settled worlds of intelligent species. The Orkz are in luck! Their purpose is to invade imperial worlds and destroy societies from within through establishing so-called “Genestealer Cults”. These units require no weapons as their talons and claws are razorsharp.

So the Biophagus. He’s a mad scientist who mastered the art of gene-manipulation and bio-alchemy. They basically create the contaminations used to infect victims with xenos genetics. Once a victim has been infected with said concoction, their body starts to morph, eventually becoming susceptible to the sinister influence of the cult. The Biophagus comes equipped with all kinds of shenanigans. The first thing you notice will probably be his staff-like, pointy weapon, his injector goad. This weapon serves as both a tool for their bio-alchemy as well as a horrific weapon of war. Next to this weapon, the Biophagus is also easily distinguishable by the funky laboratory stuff he has on his back.

The Aberrant is a Genestealer hybrid who was born mutated. Comparable to the Astra Militarum Ogryns, these guys are also big blokes with inhuman strength, but also quite limited in intelligence. Our rendition of the Aberrant comes with a two-handed, well in this case three-handed, Heavy Power Hammer. Their brute force is an incredibly important asset in battle, wreaking havoc and carnage on any foe, whilst moaning slurred praise to the Genestealer Patriarch as they charge in.

As close to humans as the Genestealer Cult is gonna get. Born as a Genestealer hybrid of the fourth generation, these guys will actually pass for fully human, which is perfect for infiltration operations. Their main purpose is to infiltrate Astra Militarum regiments to eventually take over control entirely. They will stay incognito until the day of insurrection, revealing their true allegiance. They are pretty fanatical, and will do pretty much anything their masters ask of them, without hesitation. Proper cult material.

The Metamorph is the last unit we’ll be looking at. He’s a Genestealer hybrid of the first or second generation, but reached his metamorph state by mutation through the will of the Hive Mind. Being mutated is perceived as a sign of greatness by their brethren, making them hailed as saints blessed by the Xenos gods themselves. Other cultists please these genetic monstrosities, appeasing the otherworldly powers that brought them into being.